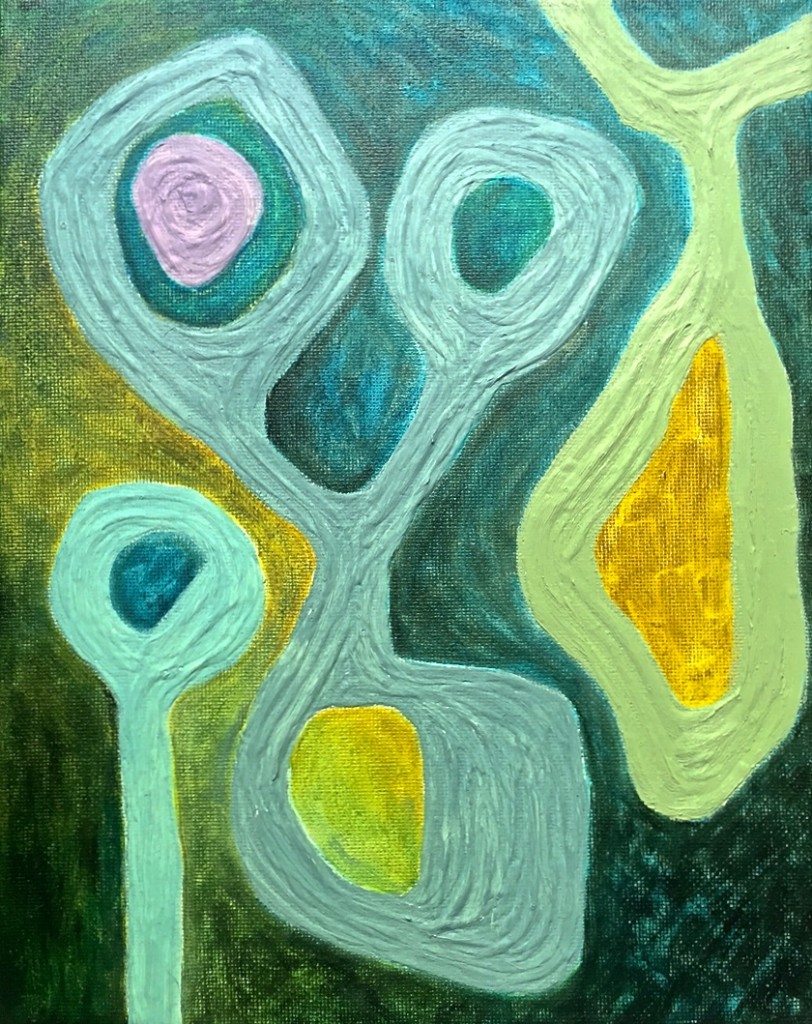 It was starting again.

Zef stood on the gravel shoulder of a rotting two-lane highway. He gazed off into the distance, lightning flashing behind his eyes.

The flat horizon shuddered and began to melt as an 18-wheeler blew past, fueled by meth and diesel, headed due east towards better times.

In the dust storm of its wake hung a wavering cloud of random objects, replacing the burnt brown landscape with a rolling gossamer river of everything that wasn’t nailed down.

A hawk swooped down, flying directly through a large chest of drawers. The image stuttered, briefly disintegrated, and reformed. A momentary glitch.

Bobbing about in the undulating stream were people; frozen in place outside the confines of time, hanging midair, midsentence, motionless. People doing what people do….standing at the mirror picking their teeth, poised to make a hoop shot, pulling a pie from the oven. People eating, people arguing, people sleeping. All stock still and silent, suspended in the ether, rolling past Zef in slow motion to the left, anti-clockwise, set adrift amidst the detritus of existence.

Zef’s arm darted into the stream like that of a jaded business traveler reaching for a suitcase on the luggage carousel at the airport, his hand decisively snatching a small rectangular box the color of a robin’s egg.

As he stuffed the box in the pocket of his jeans, the cloud dissipated, vanishing into wisps and tendrils, returning the bitter landscape of tortured weeds that stretched into the faded silk of the sky.

The money for the motel had been earned in the usual way.

Zef sat in the lone chair in the room, Shy curled like a cat at his feet. There was a small table, a bed, torn curtains dangling defeated and lifeless off the rod. The only decor a bare rectangle of dirty white framed by nicotine yellow where the cheap print of a beach scene or a sidewalk scene or a bowl of cabbage roses once hung.

Reaching this place hadn’t been so much a journey as a dream. The type that sometimes accompanies a catnap that leaves you stumbling into wakefulness, half still in another place and panicking because you missed the school bus even though it’s 4:30 in the afternoon and you only slept for 20 minutes.

In the bathroom bolted to the wall over the sink was a mirror, a reflective sheet of polished stainless steel just like they have in prison, next to a paper towel dispenser taped with a sign that read DONT FLUSH scrawled on torn cardboard.

Zef hadn’t spoken since they arrived.

Shy sat up and stretched, thin arms bowing backwards. “Gonna have to fix you something to eat. Bacon and eggs basted in the grease just how you like ’em. And biscuits with butter. Buckets of butter.” She rose to her feet smooth as water flowing downhill and pulled a wax paper wrapped sandwich from a cooler. The last scrapings from an empty jar of Jif spread thin between two slices of dust.

She kissed the crown of his head and placed her bare foot on top of his.

Zef placed the pale blue box on the edge of the cigarette-scarred table.

Shy wiped her hands on her thighs and shot him a look, sly swaddled in expectant. The lid opened with a definitive snap.

Instantaneously the walls and ceiling came alive with flecks of prismatic color.

Shy twirled the Tiffany bracelet around her index finger, diamonds set to fire by a thread of sunlight, so brilliant it seared the retina.

She turned it over. Engraved on a small silver circle near the catch were the words “Delores&JerryForever.”

Shy clasped the bracelet around her bare ankle and smiled. “Fits like the day I first got it.”

She motioned come here with her pinky as she lounged back on the stained bedspread, the room suddenly smelling of moneyclips and snowflakes, tasting of tennis and cut flowers and the boredom of easy.

Shy sidled up to the window and lifted the shade. Cracked and heaving parking lot littered with Coke bottles and candy wrappers, rippling heat rising off sun-seared cement. The temperature in the already stifling room elevated instantly.

“It’s a glorious day out there, baby. Can you hear the magnolias blooming? And the tiger lilies. And roses. Trillions of roses.”

A shadow passed through the room and she couldn’t see Zef’s eyes.

She motioned toward the sandwich. “Hurry up and eat your eggs. We’re going out.”

She turned back towards the window.

“It’s a world full of roses out there, baby.”