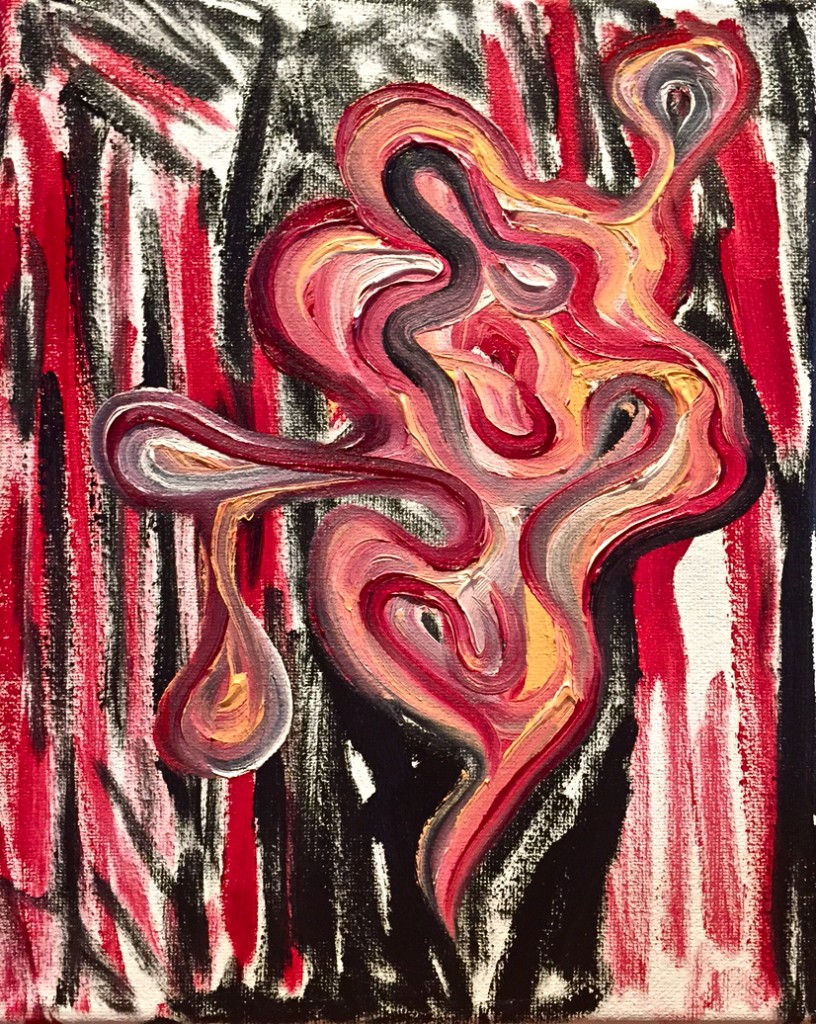 It has been brought to my attention that had I been concentrating on one style of painting over the past two years instead of “being all over the place,” I would be getting pretty good by now.

People would be able to look at what I did at the beginning compared to what I’m doing now, and say “you’re getting better.”

Instead, they tend to look at what I’m doing now and get confused.

For the past couple months, I’ve been spontaneously painting a small oil on canvas pretty much every day. All of them are abstract, and all of them are very different. I look at each new blank canvas as an experiment, an opportunity to try something I haven’t tried before.

None of them are planned ahead of time. I just mix up some paint, and see what comes out.

Some of them turn out quite well; others, not so much.

Right now I have about 40 of them up around my studio.

Anyone looking at them would be hard pressed to say which ones were painted first. There is no thread of continuity; no linear path from so-so to good to better.

If someone’s conception of success is reaching an endpoint on a line,
my approach might seem pointless…just a bunch of random abstract paintings.

But to me, they are far more than random abstract paintings.

They represent freedom from the conventional definitions of progress. Freedom from the practice of constantly measuring and comparing.
Freedom from a whole host of paradigms that people take for granted.

They are my declaration of independence.

People typically think of progress as taking methodical steps along a fixed path toward a specific destination. If you reach it, you’ve succeeded.

If you fall back, or take a detour along a different vector that doesn’t bring you closer to your goal, you haven’t.

Progress is seen as moving along a straight line.

We are encouragd to stay on the line. The message is: Pick something and stick with it. Take one step after another. Don’t let yourself be distracted. That is the secret to success.

Society likes this approach because picking one thing and focusing on it allows for a more smoothly operating civilization, which relies on people filling defined roles and functions.

The big downside is that society’s obsession with “staying on the line”
can result in a narrowing of vision as people go deeper and deeper into their own specific channel to the exclusion of all else. Other possibilities and ways of doing things fall out of sight.

At the same time, it sets up a situation where people are constantly trying to “measure up,” comparing themselves to where they were, to where they think they should be, and to where others are at. It creates a system of relative value that makes it easy to find yourself lacking.

I got tired of that system.

So I decided to do something different.

I stepped off the line. And in the process I found myself seeing everything in an entirely new way.

Not just in terms of making art, but in my own life, and existence in general.

Giving up the notion of sequential straight line progress opens you up to new ways of thinking and being and creating. It can take you in directions and to places that go far beyond where you would have ended up had you stayed on the line.

Picture it in terms of progressing 3-dimensionally as opposed to 2-dimensionally. If you’re floating out in the universe, any movement in any direction is progress outward. There is no way to fail or fall behind, because there is no up or down, no forwards or backwards.

As you proceed, you cover more territory. Your scope gets larger.

Like a comet following its own trajectory, as you continue to move and acquire new experiences and insights, you expand. More darkness is illuminated.

You could be zig-zagging all over the place, but the net result is a brighter sky.

Of course, I’m not implying everyone should drop what they’re doing and start flailing around.

There’s nothing wrong with picking a path and sticking to it; it’s a good way to get from point A to point B when you want to go from A to B.

But sometimes what you really crave is to go from A to Q to purple.

There is great value to be gained from stepping off the line, even if it’s a temporary detour while you find another more fulfilling path to devote yourself to.

These detours take you into new spaces that you might not have accessed if you had rigidly held to your original path. You acquire new aspects to yourself that can’t be measured in linear terms.

You learn things about yourself you never would have discovered.

Will I always paint in such a random and intentionally inconsistent fashion? My plan from the beginning was to go broad, to try many different approaches, to push myself beyond what I already liked. But who knows…maybe tomorrow I’ll find a direction I want to hone in on for a while. Regardless, I plan to keep things open.

Of course this isn’t really just about painting. It’s about making your life
more expansive and satisfying. And not worrying about what anyone
else thinks about the course you take to get there.

Because as long as you’re moving and continuing to create, there are no mistakes. You cannot fail.

It’s all progress. No matter which way you end up going.