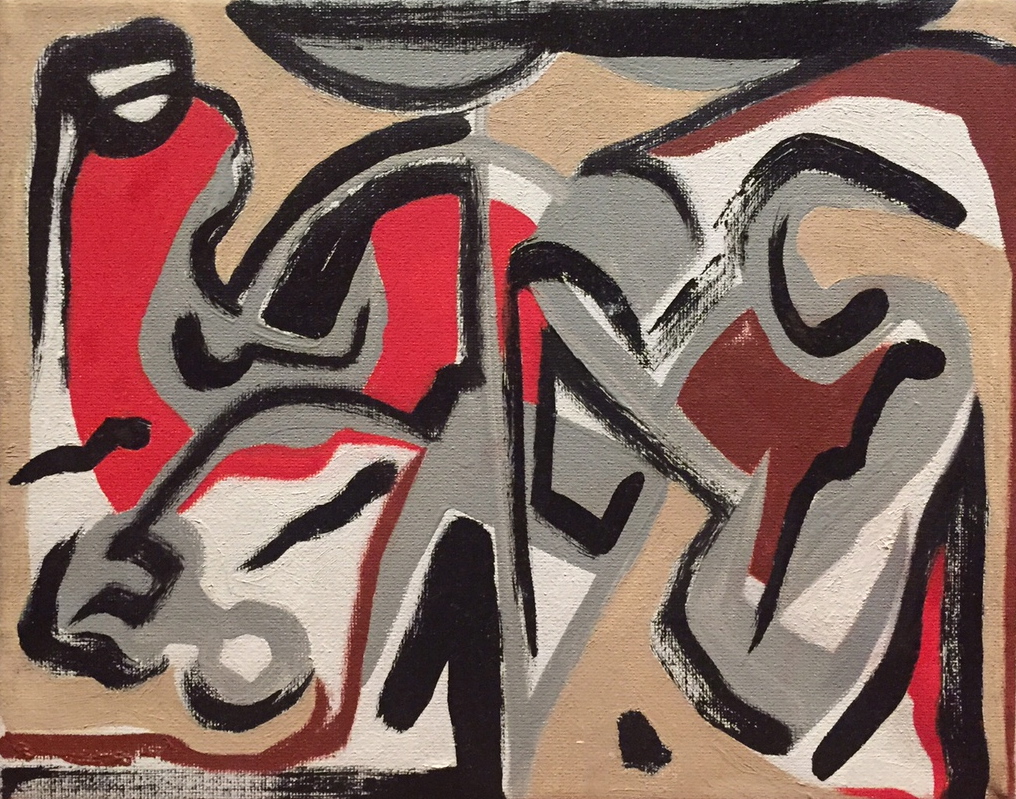 You are alone in a hotel room, new but already dated, beige shag and heavy Mediterranean woodwork. Voices filter through the wall, there are people talking in the adjacent room. You can hear them but can’t make out what they’re saying.

You listen closely and begin to catch occasional words.

“The car is waiting.”

Are you actually hearing this, or is it just your mind seeking patterns in the muffled syllables?

Intently focused, struggling to hear, you are distracted from the fact that the room is changing.

Unidentified wetness seeps up through the floor turning the carpet dark. The bed is growing a light fur of gray green mold. The ceiling mildews, patches spreading and joining, forming a mosaic of damp and mottled black.

As you turn your head away from the voices, you begin to sink into the floor, supports rotted by the moisture. You drop through the floor joists into a bog, a substrate, layered like chunks of torn and crumbled foam.

You push your way through and come to a soft spot in the wall, decomposing and stretched thin to near transparency.

You can see inside the other room, a mirror image of your own.

Two men sit in bottle green leather club chairs, and a woman reclines on top of the still made bed. Black pencil skirt clinging to her thighs, legs crossed at the ankle, oxblood pumps outlined against the avocado and gold brocade of the bedspread.

The men are wearing suits, both rumpled, one sweaty. The woman is bored.

They are not talking.

No mouths are moving but I can hear them inside my head.

One of the men is planning to kill the other.

The woman knows this, and has no fear whatsoever. She is merely waiting for the deed to take place. She finds the waiting tedious, and is thinking about her son who lives with her sister; relieved her sister was willing to take him. Better for everyone.

The man who is about to die feels his stomach rumble and thinks about what he had for lunch, tuna salad sandwich and chips. He wonders if the tuna was bad. Or maybe it was the mayo.

The other man is not thinking at all; his mind as blank and flat as a stagnant pond.

The woman is annoyed, “Get on with it.”

You hold your breath, her voice echoing in your head. But no one else appears to have heard.

Blood turned to freon by the chill of what is about to transpire, your heart pounds against the permafrost, vibrating the air, sending out an icy finger which reaches through the translucent portal and into the other room.

The woman shudders and pulls her sweater tight across her low-cut satin blouse.

The blank man stands up and walks to a small counter with glasses and a bottle of brown liquor. He pours three fingers into three lowballs, neat.

“So bring it over already.” The woman snaps at the man holding the drinks. “Chop, chop.”

“Do I look like a waiter? Keep your shirt on.” He sets the glass down on the bedside table in exagerrated slow motion.

She shoots him an eyebrow as she snatches it, but doesn’t drink. Bracelet jangling, she stirs the liquor with a long finger tipped in blood red polish; long nail, filed to a point.

The blank man turns and hands the other glass to the seated man. “Drink up, Jim.”

The seated man wipes the beads of perspiration from his upper lip with the back of his hand and raises the glass.

The hand is shaking. He needs this, needs it to still his guts. To still the voices in his head that whisper how things might have been if other choices had been made. To steel his nerve.

From behind the decayed wall I watch the dark liquid slosh against the rim as it moves towards his mouth. He takes a deep swallow, lowering the now empty glass. “Hit me again.”

The belt has passed over his face and is around his neck before it registers.

You watch transfixed as the glass drops from his hand in stop motion, levitating elegantly toward the carpeted floor where it lands softly on its side. The remnant of whiskey dribbles out over the edge and is slowly wicked up by the rug, staining the fibers sepia. The sight makes you feel something you cannot identify. The indescribable beauty of desolation.

When at last you look up, the man is lying dead. The woman is on her knees rifling through his pockets, pulling out a folded piece of stained and wrinkled paper.

The blank man watches her with a mix of disdain and admiration. “What, no water works? You’re one cold bitch.”

The woman stands up, places the paper carefully into the inside pocket of her handbag, closing it with a decisive click. She glances at the gold flecked mirror.

Her makeup is impeccable. She fluffs her hair.

“Save it for the beauty parlor. The car is waiting.”

She looks icily at the man as he impatiently motions her towards the door.

You see the pistol in her hand, hear the curl of smoke leave the barrel, taste the look of confusion on his face, feel the bullet strike the blank man’s skull.

Then, turning to face the wall, she looks directly at the place where you are standing, pinpoint pupils meeting yours in a glacial embrace.

Her eyes narrow as she memorizes the outlines of your face, storing the image to be dealt with later.