Today Is My First Birthday. 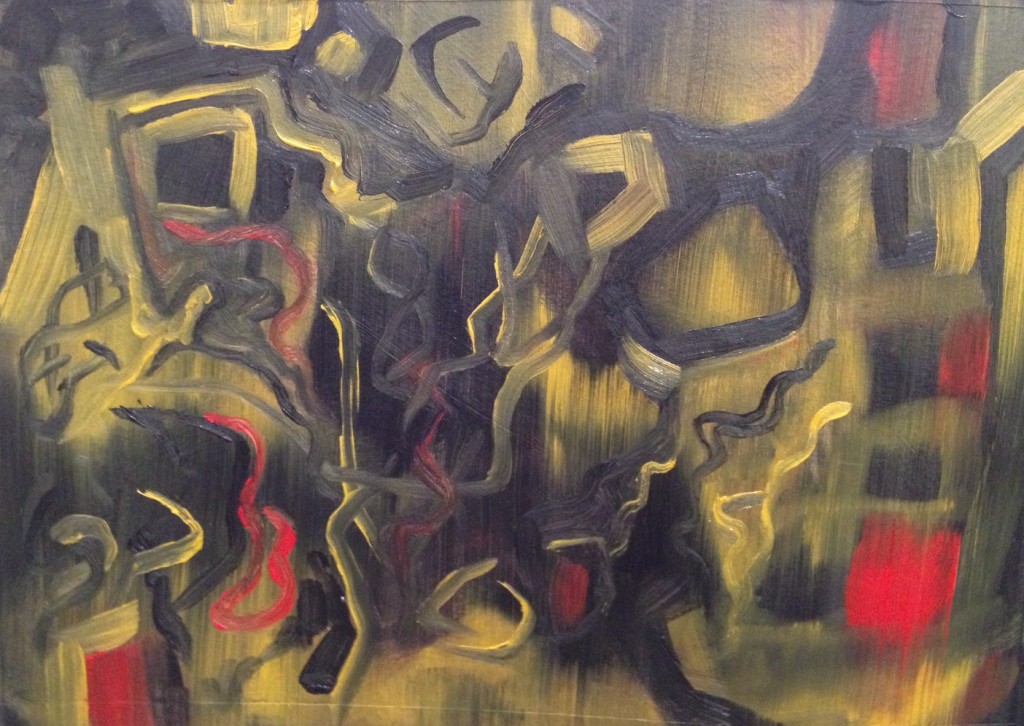 Exactly one year ago today, I picked up a brush for the first time and started to paint.

Prior to that moment, I had been existing in a twilight state; present but not fully engaged. It might not seem rational, but by taking that seemingly small step, the permafrost that had encased my soul and held it in suspended animation began to melt.

If you want to see my first painting, scroll down to the post at the bottom of the page. If you want to see a description of what it looks like to start from Absolute Zero, as in the freezing point where all energy and motion cease, read the entry.

Since then, I have painted well over two hundred paintings.

Some scrawled out from my subconscious as fast as I could get my hand to move. Others obsessively pored over and reworked and revisited for hours on end.

I’ve been taking classes where I’m practicing realistic drawing and painting to expand my skills; still lifes and the like. But the paintings I do for me are all abstract.

Have I gotten better?

Depends on what you mean by better.

There are several extremely spontaneous and unskilled pieces I made at the beginning that are right up there in terms of satisfaction with some of the more crafted and intentional work I’ve been trying to do lately.

As for me as a person, I don’t know if I have the words to express the magnitude of that improvement.

Over the past 365 days I have emerged piece by piece from a place where I was so afraid of my own cruel self-judgment that I held myself back from doing something I had wanted to do FOR DECADES.

Even after finally gathering up the courage to make that first brushstroke, I was so tentative and fragile and lacking any semblance of confidence that I only painted at night when everyone was asleep and then hid everything I had created before they woke up.

I didn’t tell anyone I was doing this until after I had painted my 50th painting. Not even my own family.

Yet somehow, the basic act of putting down paint onto blank paper, page after page after page, painting after painting, each one different from the last and none based on what I was seeing with my eyes, ignited something inside me that was so deeply buried I didn’t even know it existed. Jolted me back to life as if I were connected to a pair of jumper cables hooked up to a supernova.

I consider the painting at the top of this post to be the first “real” painting I made. I have no inkling what it might suggest to anyone else, but to me it is an analog for the process of transformation I have experienced over the course of this past year.

It began as a field of black. I started blindly, making red and gold shapes, no idea where things were heading. Continued layering more color, more shapes. Got discouraged and rubbed them all out. Started over, putting new shapes over the traces of previous ones.

The process repeated, taking me through a range of feeling far broader than anything I had known. The thrill of forming something that I had never seen before. The frustration of trying something and seeing it destroy something I had liked. The elation of watching it come back together again.

It’s impossible to convey how I was able to experience a lifetime of emotion in the span of making a single painting.

But that’s what happened. Time ceased to function in the usual way. The universe shrunk down to the space of just me and my easel, and with nothing more than a brush and some paint, I built it back up again into something infinitely bigger and more alive than it was when I started.

For most of my life I had been devoted to playing the role of an appreciator of art made by others. I looked at every painting as another world. You enter into it. Walk around in it. Take pieces of it home with you. I spent a great deal of time walking around in other people’s worlds.

What I was missing was the awareness that when you CREATE a painting instead of merely admiring one that someone else created, you open up a portal that takes you so far beyond what currently exists that your entire being has to reconfigure from the bottom upward to accommodate all of the possibilities. And as your mind expands in all directions to make room, your soul expands as well.

Many of my paintings are black and white. A large percentage are very simple.

Nevertheless, all of them are incredibly important to me. And each time I painted one, I crossed over into new consciousness, new awareness, new understanding.

All of which creates change.

Every single aspect of my life has changed for the better, to an unfathomable degree.

This past September I began to think seriously about writing this blog. Another thing I had told myself I could never do.

I began posting, but I made the posts private. Hid them.

Although I had gained enough inner strength to begin showing people my paintings, I still couldn’t bear to share my story. It was too raw, too personal.

I found myself right back where I was at the beginning, despite all of my progress.

Recently I spent a day going through the stacks of paintings in my studio. In looking back over what I’ve painted, one after another, it struck me in a profound way that I had made these things. I had created them out of nothing, and now they existed, regardless of what anyone might think of them.

It dawned on me that what mattered was not whether what I had created was “good,” but that it had, in fact, been created.

I decided that the same would be true with what I’m posting here.

After spending the majority of my life hiding the parts of myself that I didn’t think were “good” enough, I finally decided it was time to knock that shit off. So here I am.

Welcome to my blog.