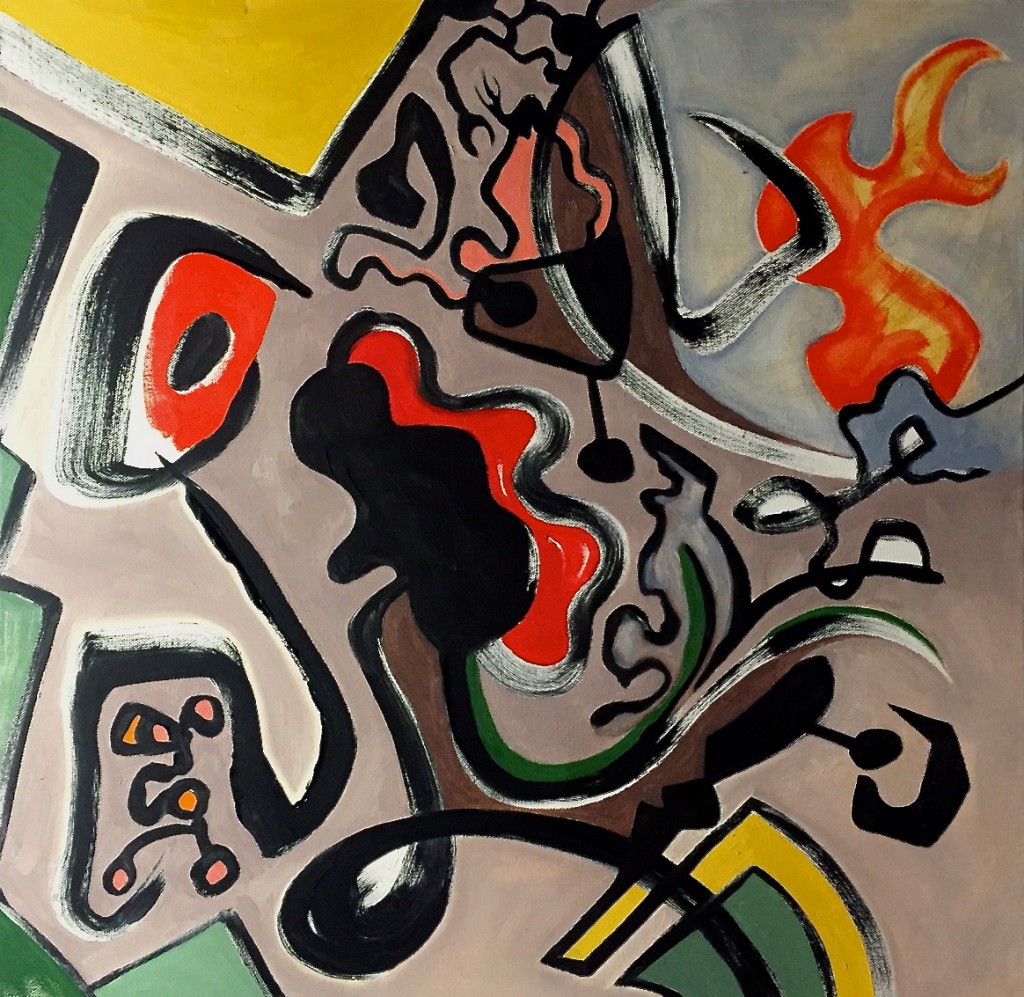 Delores threw the wadded up t-shirt at the lumpen shape slouched on the sofa.

“You just shot me in the face!”

Jerry blinked, staring at his wife, a feeling of creeping dread sliding up the back of his throat. Jesus, not this again.

“Did you hear me, Jerry? I said: You just shot me in the face! Took a gun, pointed it directly at my head and BAM!” Delores reached into the laundry basket and launched another volley, this time a bundle of socks, hitting him squarely in the center of his chest.

Jerry flinched. He looked up pleadingly at his wife. “You’ve been watching too many soap operas.”

“Don’t try to deny it! You know what you did. Right now I’m lying on the floor, choking on my own blood. Are you happy now, Jerry? Did you get what you wanted?”

Jerry sat up and slumped forward, holding his head in his hands. “Christ, Delores. I don’t want to play this game right now.”

“Game? You think this is a game? Well, you certainly weren’t playing a game when you pulled the trigger. Are you listening to me, Jerry??”

A barrage of underwear and dishtowels rained down on his hairy shoulders. Jerry shook his head with resignation. Delores would not be put off. It was going to be a bumpy night.

“Remember?? What the Hell are you talking about? It’s 1972! We’ve never even been to New Jersey.”

“Oh, we’ve been to New Jersey all right. Late September. The Arcturus Hotel. 27th floor, Penthouse Suite. Starting to get the picture? I’ll never forget that godawful cabbage rose wallpaper and hideous mauve carpet. Except the carpet’s not mauve anymore, Jerry. It’s turning red because I’m bleeding out all over the place. Because YOU JUST SHOT ME IN THE FACE.”

She stood over him, arm cocked and ready to hurl a rather formidable Playtex support girdle at his head. “Is this ringing any bells for you, Jerry?”

…In a plush hotel room in New Jersey, a tall, handsome man lay dying on the floor, choking on his own blood, staining the carpet crimson; his perfectly chiseled jaw hanging open, shattered, listing to one side. Bloody particles of gray matter spattered the silk wallpaper, a chunk of tooth embedded in the exact center of a dusty pink cabbage rose. A plain, middle-aged woman dropped the still smoking gun and stood shaking, mouthing the words “I’m sorry” again and again, thin lines of foamy spittle stretching between her lips. She wanted to caress the bleeding figure, stuff the blood back into the mangled hole and kiss the wound closed. Instead she slumped to the floor and waited for the police to arrive.

“Damn, Delores! I totally forgot about that one. It’s all coming back to me now. You were Nick Falco, king of the romantic comedy. I was your personal assistant Gail.”

He sat upright, eyes gleaming. “Man, you should’ve seen the look you gave me when I pulled out the gun. Priceless.”

Vindicated by the admission, Delores dropped the girdle and smiled indulgently. “You shouldn’t have been so jealous. After all, I was a major movie star. I had charisma, boyish charm…I was irresistible. Of course everybody wanted a piece of me! Starlets, groupies, pancake waitresses, anything on two legs. When you luck out with a face like I had, well, you know the rest. You can’t fault me for that.”

“But I was the president of your fan club for Christ’s sake! I would have done anything for you, anything to be close to you.” Jerry winced as the full force of the memory returned.

It was too late to turn back.

His thick features quivered, turning tragic. “You knew I was hopelessly in love with you so you used me, doling out your attention like hits of cocaine, keeping me addicted. And then you humiliated me, forcing me to run your dirty little errands, clean up your messes. Always so condescending, flaunting your fame, your money, your endless string of cheap floozies. Confiding in me when it was just a cynical way of shoving your conquests in my face. I gave my life to you and you treated me like a dirty kleenex.”

Malice flashed beneath heavy brows. “You owed me.”

Delores shrugged. “You were a dumpy little mouse. I was a box office god. Of course I was a self-indulgent jerk. What did you expect?”

“I know, I know…you’re right.” Jerry sighed, rolling the event around in his mind. “I guess I just wanted to know what it felt like to be so rejected, to want something so much that I was willing to destroy it rather than see someone else have it.”

Overcome with the emotion, tears began streaming from Jerry’s eyes. “If I couldn’t…have what…I wanted… why… should you…be able to?” The sentence came out as a choked whimper gasped between heavy sobs, his barrel chest heaving under his ribbed Hanes undershirt.

Delores’ tone turned soothing, conciliatory. “Oh Sweetie, don’t cry. It all worked out for the best. I was getting tired of all the adulation and mindless sex anyway…it was always so damn predictable. Frankly, I was crushingly bored with the whole persona; typecast as the cliché of a cliché on screen and off. Everybody wants you to be this caricature all the time; there was no room to move. Suffocating. I’d gotten to a point where all I really wanted was to be surprised by life again, and boy, was I! I really didn’t see that one coming! So I guess we both got what we wanted.”

Jerry rubbed his eyes with meaty balled up fists and nodded, the pain of the recollection dissipating as quickly as it had arisen. He blew his nose loudly on a checkered hanky.

“You know, Delores, the truth is that even if I had a chance to do it over I wouldn’t change a thing. It was worth it. All of it. Even the 20 years in the women’s penitentiary.”

“I know it was, Dear. It was worth it for me, too. Anyway, I suppose it was payback for the time when you were the captain of that whaler off the coast of Greenland and I threw you overboard and commandeered your ship. So now we’re even, right Darling?” She smoothed her apron, held out her arms and smiled. “I love you, Jerry.”

“I love you too, Delores.” Jerry stood up, moving toward his wife.

As they embraced, the room shimmered and faded, replaced by the endless transparency of space yet to be invented, interrupted only by two softly glowing forms floating in the emptiness.

Delores tenderly extended a delicately feathered tentacle and stroked Jerry’s side. The translucent blue hairs on his back rippled in response.

A thought passed simultaneously between them. In a sparkling cloud of white light, the pair exited the nothingness, once again venturing into the unknown magic of yet another place and time.